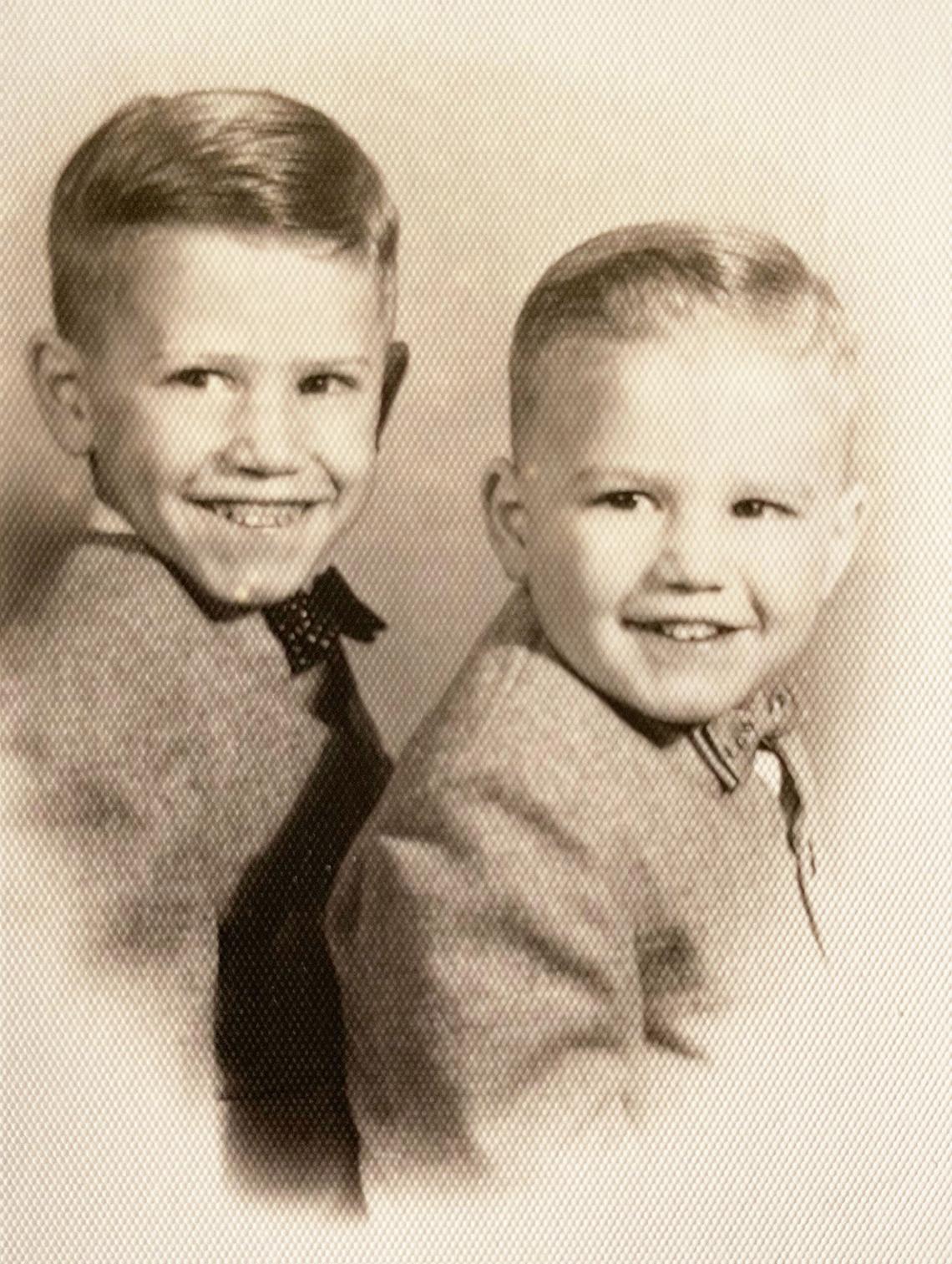 Jerry Buchanan, 71, of Alexandria, passed away April 28, after living most of his life with mental illness.

Doug Buchanan, along with his wife, Patty, who live in Michigan, shared the story of Jerry’s life in hopes that it might help others who are dealing with mental illness. They want to help others to better understand the disease. They want others to know they are not alone and that help is out there.

Jerry Buchanan (left), was the oldest of three boys. He is pictured with his brother, Doug, who was the middle son.

And they want others to know that even though there were times when Jerry would act out with what they described as “holy wrath,” he did so because it was what he felt he was called to do. It was what he believed was his purpose. He thought and believed with all his might that it was a higher calling from God.

They also want people to know that even though there were some pretty harrowing times over the years, in his final years, Jerry was known as a “sweet old man.” He worked at the Alexandria Opportunity Center and also read to children at Adventure Alley and would give money to people in need. He lived much of his life on his own and was able to care for himself.

Doug said before his death, Jerry lived at Woodcrest Assisting Living in Alexandria and that the staff there saw humanity in his brother. They cared for him and told Doug that it was their honor to care for Jerry.

“They showed so much love for him, talked kindly to him and cared for him deeply,” said Doug. “It gave us comfort knowing he was cared for like that.”

Doug said throughout Jerry’s life, he never felt worthy and that all he wanted was to feel valued and that he wanted to work for a cause. He said everyone in their lifetime wants validity, whether it is through their career or from relationships. And for Jerry, his purpose was to be a servant of God – no matter the stakes. Jerry acted on what he believed in his head, said Doug, even though at times, for those around him, it was concerning and challenging.

Late in his college career is when Doug said Jerry started to hear the voices in his head. He said Jerry was convinced that God was calling on him just like God called on the prophets Moses, Paul or Elijah.

In his younger life, however, Doug described his brother as being bright, creative, imaginative and analytical. He said most believed that Jerry had a promising and successful future ahead of him. But the mental illness kept that from happening.

When Jerry was initially diagnosed, it was determined that he suffered from schizophrenia. Later on, he was re-diagnosed and labeled as being manic/depressive.

But before his illness was fully recognized and treated by doctors with antipsychotics, Doug said his brother’s thinking and behavior profoundly affected both himself and those who loved him in very onerous ways.

Doug believes it was the turmoil of their parents’ divorce that played a role in the onset of Jerry’s mental illness. His mental illness manifested itself in religious distortions, he said.

Jerry Buchanan, in a photo from 1977, is reading from the Bible.

Doug said that Jerry had participated in Bible studies where he would strongly preach about the conviction of sin, repentance and forgiveness and that many people, including one young woman, really believed in his brother’s mission and passion. The young woman believed it so much that she eventually married Jerry. Doug and Patty learned later from them, however, that Jerry and his wife didn’t marry because they loved each other. They married so that together, they could carry out Jerry’s mission.

After they were married and living together, Jerry would start his day by praying for three to four hours for his “desperate sinfulness,” Doug said. He remembers a time when he and Patty went for a visit and how confused and dismayed they were at how bizarre it all seemed to them.

“He had a pulpit in his living room from where he preached to us and to his wife,” Doug said. “This was turmoil for me and my wife.”

Over time, though, Jerry’s wife struggled with what was real and normal, and Doug said she eventually left Jerry and “escaped” from the marriage.

Jerry Buchanan, who suffered from mental illness much of his life, is seen in a picture taken sometime in the 1990s.

Because of his mental illness, Doug said Jerry didn’t understand that his obsessions with praying, repenting, begging for forgiveness and that his fascination with guilt and sin were not normal. And that it negatively impacted the relationships with those around him.

“He sincerely believed he was called to be an instrument through which the Holy Spirit would convict of sin, just like the prophets in the Bible and just like the legendary preachers he read about in religious history,” said Doug. “He was under an overwhelming compulsion fed by his illness and he couldn’t see life any other way.”

Throughout his life, Jerry traveled and lived in many different areas across the country. There was even a period of time where, according to a calling he believed he received from God, he moved to the mountains of Montana and lived for months in a cave. Doug said he ended up slipping off the mountain, fell into some trees and after eventually being found, was taken to the hospital.

Jerry (right) and Doug Buchanan, brothers, are pictured during a family trip to the Badlands in South Dakota.

He said their mother spent months in anguish searching for him all over the country. Eventually, she caught up with him and was able to get him the help he so desperately needed. The medication brought some normalcy to his life, but there were many times, the medications failed him. Doug said Jerry spent multiple times in several different institutions where medical professionals would work on balancing and reworking his medications.

Eventually when he got older, with legal and financial assistance made available in Minnesota, which was secured by their mother, Jerry was able to live on his own but was looked after by social workers.

At times, Doug said the relationship with Jerry was frustrating. He understood that Jerry was mentally ill, but that there were tumultuous times over the years. However, Doug said in Jerry’s later years, the two of them had a good relationship and they would talk on the phone about once a week.

Patty said that Jerry, without asking, had to live a life full of struggles.

For families who live with someone who is mentally ill, it can be hard to share. Doug and Patty said that people usually live with the fear of “what will people think?”

Doug said it is more healthy to try and understand mental illness than it is to fear it.

Patty agreed with her husband, saying, “It’s better if society works to understand mental illness. We all need to freely talk about it. We are talking about this ourselves because we want to help remove the stigma and we want other families going through this to know they are not alone.”

In the end, Doug said he hopes his brother finally felt the forgiveness he so desperately wanted from God. He said that on April 27, the owner of Woodcrest Assisted Living was reading one of his favorite religious books to Jerry and told him that God forgave him and that it was OK to let go.

The next day, April 28, is when Jerry died. He is now at peace and free from the disease that caused him so much distress.

Note: This is not a comprehensive list. Instead, it is a list of just some of the local resources available.