Lynda Michaud Cutrell’s passion as an artist came to life shortly after a family member was diagnosed with schizophrenia in 2008. Thirteen years later, Cutrell’s creations are sparking conversations and raising questions about mental health in the United States.

“The Many Faces of Our Mental Health” exhibit opened at the YMCA in Concord on May 25. The installation features 99 portraits — 33 of individuals on the bipolar disorder spectrum, 33 on the schizophrenia spectrum and 33 who are loved ones of them, as well as sculptures and paintings depicting the genetic structure of our emotional lives.

Cutrell says she envisioned the portraits, which feature celebrities such as Glenn Close, politicians, and a number of everyday people from around the country, as a journalistic project.

“I thought of the project as journalistic but wanted to use images to get the message across,” she says. “I found that I could reach beyond the chorus with art.”

While mental health statistics are important to demonstrate the severity of the problem, Cutrell says she believes the media often over reports the “devastating effects” of mental illness, forgetting most of those suffering lead fulfilling and successful lives.

Through her work she wants people to understand that symptoms do not define the person. And it is for this reason, she says, that no one in the portraits are named.

Along with the portraits displayed throughout the lobby and hallways of the Concord YMCA, two sculptures depict the mental health spectrum, and six paintings translate U.S. census data and scientific research on mental illnesses.

While interviewing subjects for the portraits, Cutrell says she was interested in hearing their recovery stories, and during the process, she discovered four themes.

“One, people had someone in their life who continued to love them; Two, they received some type of therapy and treatment; Three, they had a practice, such as meditation, listening to music or podcasts they enjoy; and Four, they had a sense of purpose in life.”

The exhibit in Concord includes a portrait of former New Hampshire Supreme Court Justice and current Senior Director of Public Affairs for Dartmouth College’s REACT program, John Broderick, with his son Christian, and his wife.

In 2002, Broderick was severely beaten in a middle-of-the-night attack by Christian that required facial reconstructive surgery.

Over the nearly twenty years that have passed since the attack, Broderick has dedicated many hours of his time to advocating on behalf of those suffering from mental illnesses.

It was at a speaking event at Salem State in Massachusetts, where the exhibit was being displayed several years ago, that Broderick first met Cutrell.

“When I went home after the event, I spoke to the people at Dartmouth Hitchcock and the exhibit eventually went up there. At some point she asked if she could take a photo,” Broderick says. “The people in these photos are the people you work with. They’re your neighbors, they’re everyday people and they don’t look frightening. That’s what’s so powerful about them. Mental illness doesn’t choose favorites.”

Broderick emphasized that most people with mental illnesses are out in the community, teaching, working, living their lives, but that the stigma of mental illness remains.

“When we read about school shootings the first day the shooter is evil. Days two and three the story reveals he had mental health problems for years,” he says. “This plays into idea that people with mental health issues are going to shoot up a school. It plays into our worst fears as stereotypes.”

Broderick expressed pride in his family for stepping up to do the portrait for the exhibit, and he says his son is dramatically better today. But the experience 20 years ago was a catalyst that shifted his thinking about mental illness from being an isolated taboo to a condition that affects nearly everyone.

And the work of educating and advocating continues, he says, citing a recent conversation with a Professor at Emory University where he spoke in March of this year.

“I said, ‘Doc, the question I’d love to ask is, how would you rate the mental health system on a scale of one to ten, with one not good, and ten fabulous,’ ” he says. “Sadly, he said to me, ‘I can’t answer that because we don’t have a mental health system.’ What he meant was that we have a patchwork. On the Seacoast for instance, ok, there’s money, and people have more access. Can you imagine saying that about breast cancer? It’s immoral.”

Dellie Champagne, Chair of the Disability Rights Center — NH’s PAIMI (Protection and Advocacy for Individuals with Mental Illness) Advisory Council, says she is thrilled the exhibit was brought to Concord.

“Lynda’s work has a hopeful message — those living with mental illness who receive proper treatment can lead productive lives,” she says.

Cutrell’s choice to go to art school at age 50 after a career in investment and her desire to create a deeper understanding about mental health comes at a time when interest in mental health is popular.

But it continues to be misunderstood by many, she says.

“My hope is that this exhibit leads to a deeper understanding of how we all experience our own mental health. And that recovery is attainable,” she says.

These articles are being shared by partners in The Granite State News Collaborative. For more information, visit collaborativenh.org. 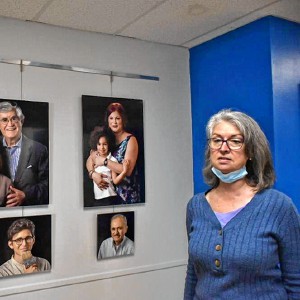 Lynda Michaud Cutrell’s passion as an artist came to life shortly after a family member was diagnosed with schizophrenia in 2008. Thirteen years…