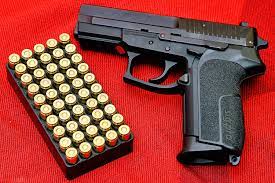 Walking into my local gun shop, I found myself surrounded by walls of them — and assaulted by an unwanted memory of a phone call I got in 2011 from my brother. “Mom found Dad’s body in the back seat of his car,” he told me, “with the receipt for the bullets.”

That was the worst loss firearms had brought me, but it wasn’t the only one: My childhood Sunday school teacher and three high school friends also took their own lives using guns.

I cleared my throat and held tears at bay. I wanted to make this fast, so I pointed to one of the neatly arrayed shotguns, sleek and black. “Oh, the Benelli Nova! This here is a fan favorite.” The salesman lifted the gun to his shoulder, squinted his eye, and pretended to aim at a target.

I have a history of suicidal feelings, and I was committed to a mental hospital in 2007 and in 2015. I absolutely should not own a gun. My entire body started to tremble.

“The Benelli sounds great,” I told him. He tried to hand it to me, and I just stared, my hands glued to my sides. “Here, try it out!” he urged. “The gorgeous Benelli Nova.”

Sweat dripped down my neck. “I’ve been in a psychiatric hospital,” I blurted. “We can work that out,” he reassured me.

“Twice,” I stuttered. “I’ve been in a mental hospital twice. I have a mental illness.”

He paused, looking me over as I stood there, neatly dressed in my favorite blue blazer and cream linen pants. “You don’t look like someone who is mentally ill.”

On paper, federal law prohibits selling a gun to anyone with a history of involuntary commitment to a mental health or substance abuse treatment facility, or whom a court has declared incompetent. (This is supposed to be a lifetime ban, though, in some states, people restricted from gun ownership can apply to have their rights restored.) Licensed gun sellers, by law, must conduct background checks to screen out prohibited buyers. But mental health reporting laws vary from state to state, and federal law cannot require states to submit the relevant records to the government agencies that facilitate background checks. States can voluntarily submit this information but often fail to do so, leaving the FBI’s National Instant Criminal Background Check System (NICS) database incomplete and inaccurate.

In addition, some 19 states and D.C. have red-flag laws, which allow law enforcement or family members to get court orders to block a person from accessing firearms if they pose a threat to themselves or others. Even so, these laws are imperfect, as was demonstrated yet again by the recent mass shooting at a FedEx facility in Indianapolis. The 19-year-old shooter legally purchased two semiautomatic rifles even after police had confiscated a shotgun from him in response to his mother’s concerns about his mental state and her fear that he might attempt “suicide by cop.” The county prosecutor did not invoke the red-flag law that could have prevented that purchase. He later told reporters that the law didn’t allow his office enough time to subpoena the records that would build a winning case; losing that case would require law enforcement to return the shotgun. The majority of states, including Iowa, where I live, do not have such statutes.

I decided to make my next attempted purchase at a national chain store, a big box that sells items from farm and pet supplies to automotive parts to home-improvement goods, food, clothing, toys — and, of course, firearms.

The saleswoman took my driver’s license as I filled out the federal form on a store computer. I carefully answered each question: Had I ever been convicted of a felony? Do I use illegal drugs? Have I ever renounced my U.S. citizenship? I marked the “no” box for all of them until I came to the one asking whether I had ever been committed to a mental institution. I clicked the box marked “yes” and pressed “submit.”

“You are unable to purchase a gun,” the saleswoman said kindly.

I let out an enormous breath of relief. I must have failed the background check.

Then she said: “You disqualified yourself.” Since I’d answered “yes,” the law prohibited her from running the FBI background check. But if I had lied, she added, the system would have let me through. “I have not had a person denied a gun purchase for mental health reasons,” she said. “You would have passed.”

From what I can tell, she was right. In 2007, an emergency room doctor in Louisiana deemed me a danger to myself and involuntarily committed me to a psychiatric hospital. But between 1993 and 2013, Louisiana reported a mere four mental health records to the NICS. Currently, the state does not report all involuntary commitments, only those ordered by a court; mine does not qualify. In addition, neither my suicide attempt in 2015 nor my psychiatric stay in Missouri was required to be reported to the NICS database. Today, the state still does not require such incidents to be reported to the FBI.

[You shouldn’t have a gun until you are 25, research suggests.]

Not all psychiatric diagnoses should prohibit a gun purchase, of course — and stigmatizing mental illness is counterproductive and can distract from the larger conversation about reducing gun violence. Someone seeking elective therapy to treat depression, anxiety or obsessive-compulsive disorder, for example, does not necessarily pose a risk to themselves or others. It should go without saying that people with mental illnesses are not inherently violent: A 2019 study by the National Council for Mental Wellbeing found that the mentally ill commit 4 percent of all violent crimes in the United States.

But guns and mental illness can combine to have especially deadly consequences. According to that 2019 study, about a third of mass shootings are carried out by people with serious mental illness. The case for stricter gun-control measures gets especially stark when we weigh the possibility that gun owners may harm themselves. Suicides account for some 60 percent of gun deaths in the United States, outnumbering firearm homicides almost two to one. Ninety percent of those who attempt suicide with a gun die, according to a study in the Annals of Internal Medicine, whereas more than 95 percent of those who attempt suicide without a gun survive. Restricting access to firearms won’t eliminate suicide — the country’s second-leading cause of death among teenagers and the 10th-leading cause of death overall — but it could save many lives.

After the March mass shooting in Boulder, Colo., the Biden administration announced that the Justice Department would “publish model ‘red flag’ legislation for states.” The president renewed his call for lawmakers to take action on gun violence after the mass shooting in San Jose on Wednesday. But unless states adopt such legislation — and unless they share the information that would make the NICS database complete, accurate and effective — too many people will slip past these safeguards. Red-flag laws have broad support: 72 percent of Americans favor passing a national red-flag law, according to a 2019 “PBS NewsHour” poll. An even stronger majority, 89 percent, agrees that people with mental health histories should be restricted from buying guns, according to a 2017 Pew Research Center poll. Despite this consensus, we have a patchwork system that is scarily easy to circumvent.

My experiment taught me that our system relies heavily on individuals to tell the truth about their mental health histories. That is a lot of responsibility to place on a person experiencing mental distress. If I had been even slightly more determined to buy a firearm — if I’d just kept quiet in front of the shop owner, or clicked a different box — I would have one right now. At the end of the day, I went home without a gun. But I wish the law had stopped me.

Tags: sonja wasden ; buying a gun with a mental illness

Things To Remember When You Hit Rock Bottom In Your Life

Happy not perfect with Poppy Jamie