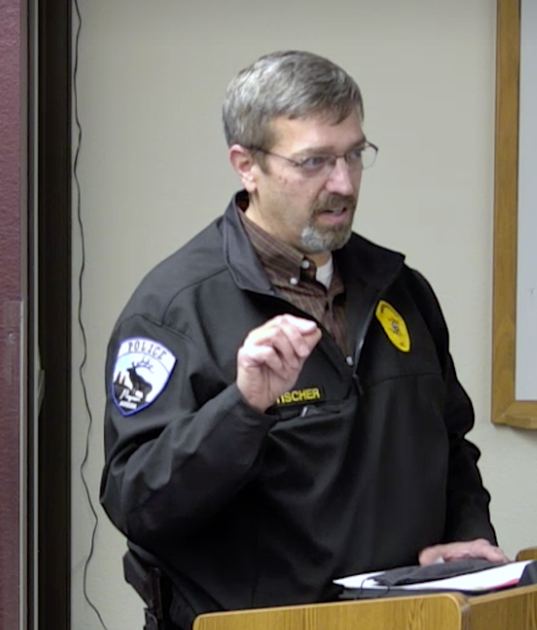 During the past year, there have been many national news reports about mental health issues climbing due to the COVID-19 pandemic and its restrictions.

The Roundup, as part of its series on law enforcement and mental health, asked Payson Police Chief Ron Tischer and Gila County Sheriff Adam Shepherd, if their offices experienced more encounters because of mental health issues the past year.

Tischer and Shepherd agree encounters between their officers and those suffering from mental illness or mental health issues have increased.

“Absolutely, the pandemic has played a large part in people having both short-term and long-term mental health issues,” Tischer said. “It has also affected all ages.

Being locked down for most of the past year in isolation has created some unique issues that we haven’t encountered before. The pandemic has exacerbated the problems with those in our community that already had issues with mental health. The inability for some to get in-person treatment or attend group meetings has held some back in getting help.”

Regarding the encounters by Payson Police,  if someone is in crisis, it is of short-term nature because of the situation in which they find themselves, or they have some sort of long-term mental health issue.

Shepherd said some time ago the GCSO began giving the option to the deputies that if they encountered a subject with known mental health issues, and the offense was minor with no victims, the deputy could decide to divert the person straight to a local mental health care provider.

“It was slow to catch on because the deputies weren’t used to doing things that way.

It saves a good deal of effort on everyone’s part if this type of diversion can be utilized.

Itseems to be getting used more as we go along.

We did not think this up — the PPD had already implemented a similar program; we saw that there was some benefit to it in some circumstances.

“Due to COVID-19, most people were not taken to jail this past year,” Tischer said.

“There is, however, a program at the jail in which people that are in need of a mental health professional can get help. The county has partnered with CBI. Those that are taken to jail and are in mental health crisis can get immediate help. It all really depends on the circumstances and whether someone has committed a crime.

“Violent felons were taken to jail.

In most cases, this is the best place to take them to protect themselves and the public.

Others were taken for treatment after working with crisis workers.”

Especially when the crisis is illegal drug-induced.”

He said the officers have a duty to protect the public and at times, it forces the officers to use physical force to take someone into custody.

“The preferred course of action is always to have the officers try to de-escalate the situation by talking to someone.

There are times though that the officer is forced to react to what the person they are dealing with is doing.

The officers are highly trained to use the least amount of force necessary to take control of a situation.”

The Roundup asked Tischer if he had instituted any new training for dealing with the mentally ill — not just in the field, but also at dispatch since these people generally have the first encounter with the problem.

“We’ve brought in a lot of training for the entire department.

It’s training that teaches how to recognize people in crisis and how to de-escalate the situation and get people to the appropriate care for the issues they are facing.

“We’re working with CBI to put on a 40-hour Crisis Intervention Training (CIT).

This is an advanced class in teaching the officers and dispatchers how to talk to people in crisis and help de-escalate the situation to reduce the risk of serious injuries to the officers, public, or person in crisis.

It’s a team approach to working with hospitals, treatment facilities, and the police to get people with mental health issues the help they need.

“We’re also doing a training on Implicit Bias, Fair and Impartial Policing, and Biases in Policing to ensure that we are treating everyone fairly and respectfully.”

Before coming to Payson, Tischer worked in Wisconsin where he said they had implemented several practices that worked well when dealing with the mentally ill.

“CIT training and constant training of officers in the area of mental health, dementia, and other serious mental health issues helped build community confidence in the police.

It has helped the officers deal with many of these traumatic crises.

We’re trying to bring in as much training as we can for the department.

“When CIT trained officers are utilized, the calls can literally take hours to work through the crisis.

So, other non-emergency calls are held until we have the resources to send.

When a CIT-trained officer starts a call, it’s imperative for all involved that they follow through with it. Working with our partners and building those relationships helps the community to understand that keeping an officer on these calls prevents these incidents from escalating. In the long run, it helps to prevent reoccurring cases from happening with the same people.”

Regarding new training for GCSO staff that might deal with someone in a mental health crisis, Shepherd said AZPOST created a 4.75-hour digital training entitled “Behavioral Health Intervention and Strategies.” The training was implemented statewide in 2018, and all GCSO patrol deputies have completed the class.

The objectives of the Behavior Health Intervention and Strategies for Law Enforcement training:

• Recognize the symptoms or behaviors associated with mental illness

• Identify methods of deescalating the situation

• Assess the behavior of a person with a mental illness

• Recognize how to communicate with a person with a mental illness

• Realize how your behavior in the presence of a person with a mental illness can calm and escalate the situation, and

Participants learn to identify behavioral cues that can indicate a danger to the officer and a number of communication tools to use.

“Recently we have also introduced a digital “De-escalation and Minimizing Use of Force” training. We are in the process of having our patrol deputies complete this two-hour course,” Shepherd said.

Major Justin M. Solberg, detention commander with the GCSO, said his staff has logged 286 hours of training on the topics of:

• Responding to people with mental illness

Shepherd said, “Since our dispatchers mainly deal with members of the public over the phone, it is difficult to specify training that would be geared directly towards mental illness as opposed to interactions in general.”

GCSO Chief Mike Johnson said, “Regarding training for our dispatchers, as part of their field training they are taught “calming techniques.”

Dispatchers also use as a standard set of questions “who, what, where, when, any weapons and how,” which allows them to get a better understanding of what is going on and what the caller’s thought process is at the time.”

Asked about changes that could make law enforcement encounters with the mentally ill less common, less dangerous, and leading to a better outcome, Solberg responded for the GCSO.

The coalition was formed to aid in developing what is called a Sequential Intercept Model, which will, when completed and implemented, advance community-based solutions for individuals with mental and substance use disorders involved in the criminal justice system.

It would develop a comprehensive picture of how people with mental and substance use disorders flow through the criminal justice system along with six distinct intercept points:

community services, law enforcement, initial detention, and court hearings, jails, and courts, community reentry, community corrections. The coalition will identify gaps, resources, and opportunities at each intercept and develop priorities for action designed to improve system and service level responses for adults with mental health and substance use disorders.”

“For years everyone looked to the police to solve every type of call, incident, or problem they were facing.

A lot of these calls weren’t even police-related, but people had nowhere else to turn. Many times, the police were not trained to deal with the issues they were called upon to fix.

Police resources, training funds, personnel, and general funding are limited. Training budgets need to be increased along with overtime budgets to allow people to go to training.

“We have to have officers on patrol taking calls every day. Currently, the only way to get department personnel to training is on overtime or on their off days.

“Police departments need to build community relationships with agencies that have the resources to help people in crisis or with long-term mental health issues.

The Payson Police Department has built strong ties with Banner, CBI, SBI, and the Crisis Response Network (CRN) to get people out of police custody and to the people that can give them the help they need.”

He said the Payson Police Department has worked with CRN to create a direct line that can immediately help people that are depressed, or having mental health issues and are not an immediate danger to themselves or others.

These people that call into our dispatch center are transferred directly to CRN, avoiding police contact and immediately giving them access to a mental health professional.

“Police departments need to continue to offer resources like the direct transfer to CRN, relationships with mental health providers and educating the public and staff at the PD to better serve those that are in need of mental health services.

“Many times the only alternative is an arrest.

Our goal is to keep the community safe while getting people the appropriate care they need.

Tags: behavioral health intervention and strategies for law enforcement, crisis intervention training for officers, increase in mental health issues because of the pandemic

When Is The Best Time To Quit Smoking