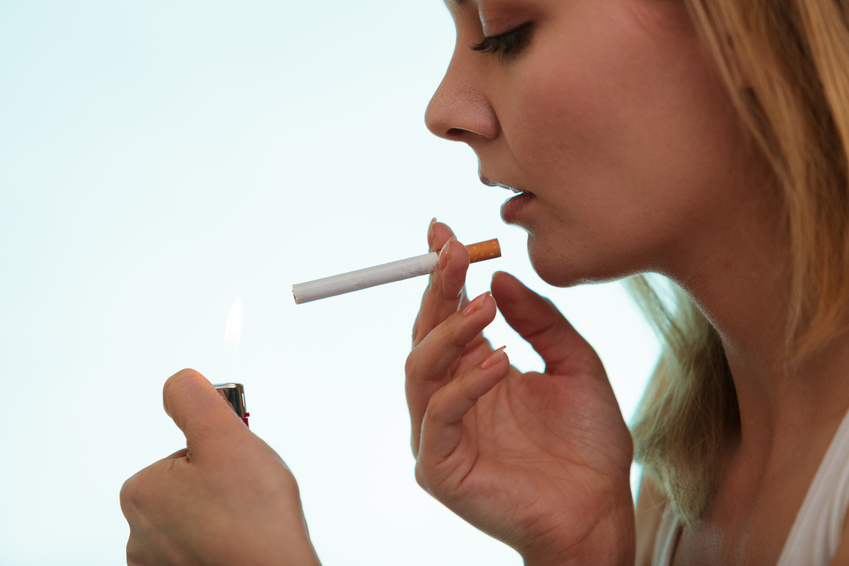 Smoking is relatively common during pregnancy, with about 10% of all women smoking at some point during their pregnancy. The rates are even higher among women with psychiatric illnesses.  While many women may be able to stop smoking or reduce their intake during pregnancy, most women resume smoking during the postpartum period.  And women who suffer from postpartum depression are at even higher risk for smoking relapse.

Nicotine and other chemicals from cigarettes are transferred into breast milk at relatively high levels.  The amount of nicotine to which the infant is exposed depends on the number of cigarettes consumed by the mother per day and also on the time interval between the last cigarette and the timing of breastfeeding. Nicotine also accumulates in breast milk (milk/plasma ratio 2.9), and some might be surprised to learn that the amount of nicotine transferred into breast milk is more than double the quantity transferred through the placenta during pregnancy.

Women are strongly encouraged to breastfeed, but women who smoke are more likely to have a lower milk supply, and those who do breastfeed tend to wean their babies earlier than women who don’t smoke. Studies indicate that smoking more than 10 cigarettes per day decreases milk production and alters milk composition. Furthermore, breastfed babies whose mothers smoke more than 5 cigarettes daily exhibit behaviors (e.g. colic and crying) that may promote early weaning.

Most studies have focused only on the effects of nicotine on the nursing infant; thus, we have little information on how the breastfeeding infant may be affected by the other toxic chemicals, including arsenic, cyanide, formaldehyde, and lead, which are found in the breast milk of women who smoke.

In addition to exposure to nicotine and tobacco byproducts in the breast milk, there is well-defined literature regarding the risks children incur as a result of passive, or secondhand, exposure to smoke, including increased susceptibility to Sudden Infant Death Syndrome (SIDS), development and/or exacerbation of allergic diseases, such as asthma, and more recurrent and chronic respiratory illnesses.  Less understood are the risks of thirdhand smoke, the residual nicotine, and potentially toxic tobacco-derived chemicals left behind by tobacco smoke on surfaces including hair, skin, clothes, furniture, carpets, and walls.

Are E-Cigarettes a Safer Option?

The data regarding the use of electronic or e-cigarettes in breastfeeding women is limited.  The recent reports of EVALI or e-cigarette or vaping-associated lung injury also raise concerns about the safety of using e-cigarettes.

What About Nicotine Replacement Products?

According to the data provided by LactMed, a 21 mg transdermal nicotine patch delivers an amount of nicotine to the nursing baby via breast milk which is equivalent to smoking 17 cigarettes per day.  Using lower patch strengths (7 or 14 mg) results in proportionately lower amounts of nicotine delivered to the breastfed infant. We have no studies investigating the use of nicotine spray or gum in nursing mothers.

Varenicline is a partial nicotine agonist used for smoking cessation.   Because there is no information regarding the use of varenicline in breastfeeding women and its impact on the nursing infant, we would typically avoid the use of this medication in this setting, if possible.

There is limited information regarding the use of bupropion in breastfeeding women; however, there are data to indicate that the levels of bupropion in breast milk and in the nursing infant are low.  While the risk of adverse events appears to be below, there was one report of a possible seizure in a nursing infant whose mother was taking bupropion. No infant serum levels were obtained. If bupropion is required by a nursing mother for either smoking cessation or the treatment of depression, there is no significant evidence to recommend avoiding or discontinuing breastfeeding.

Our information on the use of medications for smoking cessation in nursing mothers is limited, and there may be factors at play that may make smoking cessation more difficult, or at least different, in postpartum women (e.g., breastfeeding, sleep deprivation, postpartum depression).  Based on the information we do have, it looks as if bupropion (Wellbutrin) is the option that has the most data to support its safety in breastfeeding women and their infants.

That said, smoking cessation strategies have limited efficacy, and recent data indicated that multiple medications and interventions may be required for success.  If these interventions do not work or are not safe to use in breastfeeding women, one may consider the cessation of breastfeeding instead. While breastfeeding has may benefit, exposure to nicotine and tobacco byproducts in breast milk may pose some degree of risk to the nursing infant.

Prosecutor Admits Defendant Mental Illness, But Stalls Decision to Find Him Help as Law Provides – The People’s Vanguard of Davis