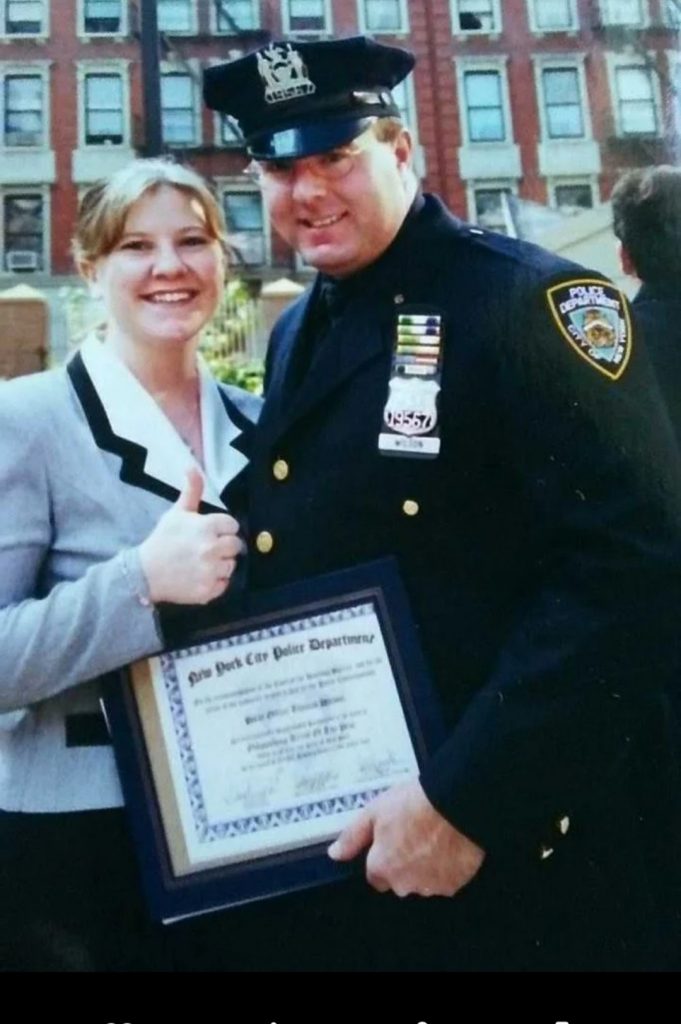 For most Americans, every Sept. 11  brings back memories of the horrendous suffering and lives lost to the terrorist attacks in 2001.

But for many of the first responders who rushed to the World Trade Center that horrible day, the painful recollections are more than a once-a-year event. They still cope daily with cancer, mental illness and other serious ailments that resulted from their rescue and recovery efforts at the twin towers and in the aftermath of the attacks.

Now, as the nation marks the 20th anniversary of the attacks, retired New York City and Suffolk County, New York, police officer Tom Wilson is among those still suffering. He receives treatment for his tongue cancer and its complications through the main health fund for 9/11 responders who were subjected to the dust and toxins that filled the air in south Manhattan after the buildings came down.

“I remember my mouth burning, my eyes burning, my throat burning breathing in all that crap,” he tells SurvivorNet.

And it’s no wonder: For the first couple of days at the WTC site, he worked without a respirator or other breathing protection. All told, he spent about 300 hours near Ground Zero.  He later was detailed for three days to the Fresh Kills Landfill on Staten Island where concrete shards and twisted metal were inspected as they passed along a conveyor belt in case any further human remains might be discovered. At least there, he had better protection, but not perfect:  filters on face masks were packed with grime eight hours into a 12-hour shift.

‘It Was So Aggressive’

When it comes to staying alive, Wilson and others depend on the World Trade Center Health Program, created to aid first responders and others who were in lower Manhattan when it comes to their ongoing medical issues.

As of June, the program was caring for 81,460 responders and another 30,582 eligible “survivors,” those who lived or worked near the New York disaster zone on 9/11 or in the weeks following. The program also includes those who may have had exposure at the Shanksville, Pennsylvania, site where United Airlines Flight 93 crashed after passengers attempted to take it back from the terrorists.

Cancer treatment is an important part of the program. The most prevalent types have been cancers of the skin, prostate, female breast, lymph nodes and thyroid. With the rescue and response effort having become nationwide in the days after 9/11, the program now includes enrollees from every state.

In addition to treatment through the WTC health program, the September 11th Victim Compensation Fund offers payments for 9/11-related injuries and deaths. It gained even more attention in 2019 when the victims were joined by former Daily Show host Jon Stewart, who made an impassioned, scolding plea to lawmakers to reauthorize and enhance the program.

The program was reauthorized through 2090, a victory for 9/11 rescuers and survivors, “but we weren’t dancing in the streets or taking a victory lap because our guys were dying,” said Rich Palmer, a retired New York prison warden who works with the FealGood Foundation, a nonprofit that supports responders and one of the groups that pushed hard for the legislation. He and other corrections employees were among those working at the World Trade Center site in the aftermath of the attacks.

The continued action that it took to reauthorize the act reflects how it has taken years for many of the responders’ and survivors’ health issues to surface.

Wilson’s cancer symptoms didn’t appear until 2008 when he saw doctors for what he thought was a sinus issue, accompanied by a chronic cough and gastrointestinal problems. At first, the symptoms were dismissed as a sinus infection, but one doctor probed deeper and found cancer.  “His big concern was that it was so aggressive,” he said. “Mine went deep into the muscle tissue.”

Wilson had to have a portion of his tongue surgically removed along with 39 lymph nodes. Doctors took a section of an artery from his left arm and implanted it into his neck. And they then fashioned a new tongue muscle for him using tissue from his left wrist. It was followed by six weeks of radiation therapy during which he lost 100 pounds and three teeth.

To this day, talking for extended periods can be painful.

Then starting in 2016, new problems cropped up as a result of radiation treatment years before.  He developed thyroid irregularities and osteonecrosis, a condition that results from bone exposure and poor blood circulation in the jaw. He fears his jaw could break and that he will require further surgery.

Wilson also has been diagnosed with radiation fibrosis syndrome on his neck, a complication for cancer survivors caused by scar tissue and radiation treatment. In his case, it is compressing his carotid artery causing severe headaches and dizziness.

Yet Wilson didn’t let his 9/11-related health issues stop his career. He spent eight years on the NYPD followed by 18 years in Suffolk County earning recognition along the way. He kept working even after being sidelined for three months while he dealt with his injuries.

He lauds the WTC health program, but noted some of the issues he developed had not yet been covered when they cropped up, such as an implant needed to replace one of his three lost teeth. There was no billing code for the $8,000 procedure at the WTC program at the time, he said, but he was able to turn to another nonprofit dedicated to assisting 9/11 front-line workers, the Ray Pfeiffer Foundation. The charity, named for a New York firefighter who died from a 9/11 related cancer, helps first responders pay for treatment that isn’t covered by insurance or other programs.

Wilson, 52, said he has been able to seek out the very best treatment. But just as he had to look for another way to pay for his dental implant. Even though more conditions have been added over time — the FealGood Foundation puts the list of cancers covered now at 68 — not all ailments make the list.

Glenn Tarquinio, 58, was lucky when it came to his coverage. The retired NYPD and Suffolk County officer’s prostate cancer was diagnosed in 2020, seven years after it was added to the list of covered cancers. As a result,  he calls the WTC program “an absolute godsend.”

As for himself, the retired NYPD officer has no doubt that his cancer is connected to the endless days he spent sifting through the rubble of the World Trade Center. All told, it amounted to 185 hours over more than four months.

“I was on the bucket brigade, rescue and recovery. You were shoulder-to-shoulder, 30 to 40 people deep, (digging with) shovels and hands,” he recalled. Dirt and debris were hoisted in buckets to be inspected for human remains. “You would see a hand in there, a foot, a shoe.” Even the small body parts would be treated as a whole, placed in a body bag and draped with an American flag.

Yet though the twin towers had been crammed with office equipment, everything was pulverized.  No desks, computer parts, telephones — “not even a pencil,” Tarquinio said. Nothing was recognizable.

Before cancer surfaced, he had to deal with another health crisis: post-traumatic stress syndrome. It started about six years after 9/11 when Tarquinio took off his usual week to indulge in home gardening and reseeding his lawn. An old shopping mall was being torn down a few blocks away and he could hear the construction equipment at work. The beeping as machinery and tractors as they backed up. Billowing clouds of dust and smoke from the site. The crash of bricks tumbling into truck beds. 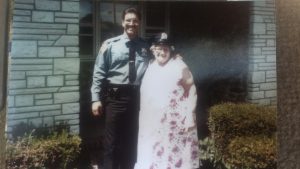 “That was the trigger. I started to get chills. I would get flashbacks,” he said. He found himself leaving the house to get away from the clamor, only returning to gardening after 4 p.m. when demolition was done for the day. One day at a hospital, he pulled aside a doctor in the psych ward he knew and told him about the problem. “Congratulations,” the doctor said facetiously, “You have PTSD.”

Tarquinio said he underwent extensive counseling. While the condition is “always there,” he’s come far enough that he became part of a peer counseling group to help other first responders cope with their PTSD.

“The amount of hurt, the amount of pain they were in,” he said of those seeking help. “You were taking on their burden.”

PTSD is an insidious disorder that plays out in different ways, such as drinking bouts or overspending. “It comes out as everything but what it is,” Tarquinio said. “Before you know it, you are buried in your own indulgences and you can’t get out from under them.”

The WTC program covers the treatment of PTSD, along with other mental illnesses arising from 9/11, including panic disorder, substance abuse and depression.

And then there are the 9/11-related ailments that aren’t cancer or PTSD, but every bit as dangerous.

‘I Couldn’t Get Out of Bed’

Michael O’Connell received specialized care after contracting sarcoidosis, an autoimmune disease that can involve inflammation in the lungs. After having joined the NYPD in 1998, O’Connell had transferred to the fire department and was a probationary firefighter on 9/11. He was in the first wave of rescuers at the scene after the WTC collapse and continued to return to the site every other day for a month.

His disease struck suddenly. Always someone who kept himself in good shape — never smoked, remained active, played lacrosse in college — it appeared one morning in 2007.  O’Connell said he went to sleep “and six hours later I couldn’t get out of bed.” At first, doctors thought he had cancer, but then came the diagnosis of sarcoidosis. He said patients can never pinpoint how they got It, only that it came from environmental exposure.

Since then, he’s joined others in the crusade to care for 9/11 first responders. While he said he’s pleased with the care he receives, he said he hopes that more research will go into making sure that sometimes rare cancers arising from the attacks will be covered. The list of covered cancers continues to evolve. It wasn’t until 2014, for instance, that malignant neoplasms of the brain, the cervix uteri, the pancreas, and the testis were added.

“I believe we did the best job we could in making sure people were covered,” O’Connell said. “More needs to be done to make sure.”

He Was a 9/11 Rescue Worker, He Got Cancer, And He Wouldn’t Change a Thing

Chris Woodyard is a freelance writer based in Los Angeles. Read More