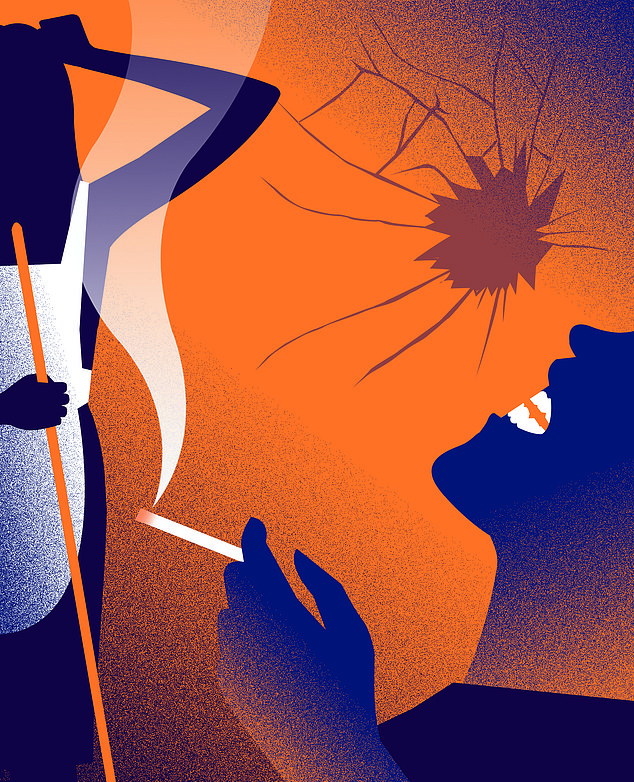 I am in a deep depression of shame, worry and guilt and I have no one to turn to. I’ve been married for over 30 years and work full-time in the NHS. I have two sons, Simon (24) and James (20). They couldn’t be more different.

Simon was always very intelligent with a low boredom threshold. He’s a graduate now, scratching a 2-2, but has never lived away from home. My younger son is hardworking and grateful for everything that someone does for him. He now has a full scholarship. I’m so glad he lives far away as I can tell phone fibs that everything is fine. He has little contact with his older brother.

Simon works now (minimum wage). He moved away from a teaching role. He won’t pay me or learn to run a house or cook. He’s broke but knows I’ve saved £ 16,000 for him since childhood and keeps asking about it.

Thought of the day

There is meadow music in the dark

And the clouds that cover the mountain

He has a daily weeding habit, has stolen thousands from us over the years, and is a believer in alcohol. I had to take out a loan to pay for the damage it caused. He says we nag, hurl abuse, says he hates us.

If we refuse him money, he will destroy something (e.g. punch a hole in a newly wallpapered room). His room is a shame as I refuse to clean it. When he takes a shower, he uses a water tank and drops wet towels wherever he wants. Arguments are daily and terrifying. I worry about illness and I don’t know if I feel love or hate for my husband or my firstborn.

My husband has a high profile job but he’s a working alcoholic who gets drunk by 7pm. I spend my evenings keeping him and Simon physically separate. My weight has increased, I no longer take care of myself.

My dream is to move away and be free and wish Simon were an independent, accomplished son that colleagues talk about. But I can’t because my 85 year old father depends on me.

Worst of all, I feel guilty as I spent a lot of time driving James around to pursue his interests and a “friend” told me Simon was against it. It was a sword to my heart.

I don’t think I can take anymore It’s slowly killing me. I sometimes think of the release that will bring suicide. This is not about me, I just want to change Simon’s life so he can be the person I know is in somewhere. And then everything could heal.

This week Bel advises a mother whose eldest son she takes advantage of, refuses to pay rent and steal money

People tend to be sentimental about motherhood, but for many women the experience can prove to be a lifelong cross.

Yes, it is a painful truth – but it is important because there are many women in your situation.

They are exploited by an adult child and treated with selfish pretensions and cruelty – and yet instinctively, miserably, take the blame on themselves.

This is the moment when motherhood becomes martyrdom and I tell you with all my heart that there is no justice in it.

You are writing to me so desperately that you saw suicide as a way to bring peace. Please remember that the Samaritans’ free number, day and night, is 0116 123 if this black mood threatens to overcome you.

Someone thoughtfully informed you that your older son Simon was upset about driving James around a lot (like parents when a child has a special interest). therefore his appalling behavior is explained away. I am not buying such justification.

We are talking about a healthy 24 year old man with the benefit of a good brain who threw away his chances because he was lazy and is now cheating, exploiting, abusing and threatening his parents.

This selfish person has never lived independently and it is time he did. It is true that he festers in his own filthy bed without anyone picking up towels or buying food. Does that sound harsh?

That’s because I feel pretty tough – or rather angry with you. And for all parents who are bullied by adult children.

Your nostalgia (longing for Simon to be like a normal son) is heartbreaking and I am so sorry that your life is made worse by the alcoholic husband who argues with his firstborn.

You’re in the line of fire between them and it’s so unfair. The first thing you need to do is stop making yourself miserable with self-blame. Even if Simon occasionally had the feeling that you were spending more time with his brother, so what? We all stamp our feet and then realize that each of us must take responsibility for our own lives.

There’s a point where excuses need to be put on hold, and Simon reached it a long time ago.

Can you access advice through work? You need support and should speak to someone as soon as possible.

Of course, the virus does this at the worst possible time to start life changes. Even so, you can and should make plans.

I know you want to save Simon from himself, but you tried and now you have to save yourself.

Of course, he should seek advice on his various problems, but he won’t because he is as perfectly happy as he is. And right now I’m concerned with your despair. It is time for Simon to be notified if he lives at home. You say your vulnerable father is dependent on you. So could this be the moment to consider moving into the room your son has vacated?

At this stage, it doesn’t matter whether that is actually the result or not. You just factually tell Simon that the room needs to be ready and close your ears to abuse. This spongy 24 year old needs to be calmly and firmly informed that he can no longer live under your roof.

How he then manages (to share with one of his friends?) Is not your problem as he has tortured you enough. I ask you to be strong and tell him.

My shameless family is violating Covid

I’m starting to wonder if something is wrong with me. I know six members of my extended family, including two of my own children (all responsible professionals), who have broken the lockdown rules for the past two weeks while I strictly adhered to the rules and stayed home.

It made me angry and ashamed of all of them as their actions are obvious and they so casually informed me. As a 74-year-old I had great times in the 1960s and 1970s, but my offenses were my responsibility and were never intended to harm anyone.

I now doubt my own integrity and my sense of right and wrong. Am i old fashioned Am I too rigid in my principles? Am I jealous of the rebels in them?

I wouldn’t sniff, but I do feel the strange man and for obvious reasons I don’t feel like I can talk to my friends about it. I don’t want to become a “bitter old woman” – but right now I could!

While I don’t want to get back to this sensitive topic, I have to because so many people have written with strong views and fears.

Not only is your problem current, but it is likely to get more urgent with this new full lockdown.

More from Bel Mooney for the Daily Mail …

It brings us back to the subject raised by David (December 19), who was similarly angry and ashamed of his hitherto loved family.

My answer tried to see both sides of the question, but was disapproved by some readers who believed David was rightly angry – period.

They seemed to think I should have increased his anger and called his family bad or something. But I refuse to be a judge and a jury.

My only concern was not whether he was right or wrong, but the effect of his anger on future family harmony. Shame and anger always hurt – that’s why I advised forgiveness and gave his wife a good Christmas. I sincerely hope that he followed this advice.

I can only give you similar advice, Chrissie. They are neither old-fashioned nor rigid, nor should you question your own understanding of right and wrong.

We are the same age and we may even have met in these wild, carefree times!

But harm can be done without knowing the consequences – then and now – so you and I may have thought that behavior was “harmless,” which it actually wasn’t.

And those who are more casual about lockdown measures have to feel that way because they question their effectiveness.

Younger people feel immortal. Others stick to the rules of the letter because they believe it is the right thing to do. Nothing can be done to erase this polarity. The country has to live with it – without verbal warfare.

What matters now is that you avoid the spiritual illness that you have carefully identified – i.e. H. Bitterness.

You can be critical of others without saying angry things that you will regret. Now you have no choice but to self-isolate and the family will have to stay away until you have received the vaccine and / or the rules have been changed.

I wouldn’t even talk about the lockdown policy on the phone. These are very depressing times and like you I am as careful as possible, but it is almost more important not to succumb to depression.

I’m trying very hard – and I have to say, I found your self-questioning honesty refreshing.

Let’s hope we can both get vaccinated soon and feel a little more secure.

And finally … we must be so very grateful

What would our life be without gratitude? I know you are probably thinking that there isn’t much to be thankful for, but why not just start by being alive?

A reader told me that the other day – and this is the time to thank you for all your greetings and words of thanks over Christmas and New Year. You are so good for me.

For example, David Neale from Edinburgh sent me a children’s poem that was printed in the Daily Mail Annual of 1947/48.

“For someone over 80, it’s a reminder of very bleak times and rationing and a great lack of everything,” he wrote.

“While the current situation is uncomfortable, we have survived worse and it is getting better!”

Wise words indeed. Enid Blyton’s cute poem is called Salute To The Children and I am sharing it here to remind you that kids and teens may not be deprived of sweets and bananas these days, but the blocking still hits them very hard.

A pseudonym can be used on request.

Bel reads all of the letters, but regrets that she cannot conduct personal correspondence.

There is no ice cream to eat

No trembling jelly, all just a shake,

Not a single creamy cake

No vacation on the sand

No donkey rides, no funny bands

No bright balloons to throw around

So many things that you have given up on.

No crackers for your Christmas day

But no bananas all year round.

No exciting toys, no birthday treats,

Not much chocolate, not enough sweets!

We adults think we have a lot to endure.

But boys and girls, you did your part!